October 2021
Soon will the snow and icy wind blow
With nowhere to hide nowhere to go
But do not care about hardships and pain
For happiness awaits you down memory lane.

That little verse just sort of tumbled out of what’s left of my brain, as each year takes a little more of it away, but I’ll tell you what… I bet we’ve still got more left than a lot of people of today ever manage to accumulate, so come on, let’s forget all our woes and get back to having fun again…

Now the first great news is that Episode 50 in our so successful ‘Great Liners’ DVD series is now produced and ready for you to enjoy. Reaching number fifty is an achievement, believe me, and one you will really enjoy watching for it really is quite special, hence its title; ‘Something special for Everyone’, and boy, has it got that… It lasts for over 70 minutes and it’s non-stop action shows us  actual moving film of those wonderful Isle of Man ferries back in their 1950s heyday, followed by even rarer film taking us right out to sea on a North Sea Trawler in the early 1930s… Even I (Des) was surprised at the hardships those brave men and boys faced aboard those tiny trawlers as they battled the hostile elements every time they set sail but especially in the winter, when this film was shot… It will open the eyes of even the most hardened seafarers amongst you and is something that every man, woman and child in the country should watch, then never again will you see them coming on TV news, complaining that they are having such a hard time! 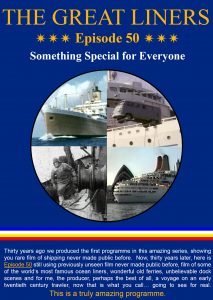 More film that I found equally as amazingly interesting is one that allows us to take you forward in time to the early days of WW2 and to London’s once mighty Royal Docks, where we find the Blue Funnel ship Calchas at her berth, being loaded with precious cargoes for Australia… It not only shows you how, even in the middle of the Blitz they just carried on as normal in the full knowledge that death could fall down upon them from the next German plane.  And the work was so much harder then, with everything being done by hand and loaded manually onto the Calchas and down into its exact positions in her holds, and in that pre computer age every little nut and bolt was recorded and logged using just pen and paper… I wonder what people today would do if suddenly finding themselves faced with a similar situation… They just wouldn’t be able to cope would they, and perhaps suicide wouldn’t be too wide off the mark!

When Calchas is fully loaded we watch her departure and as she sails so her wonderful crew know that although a heavily bombed London Docks was no picnic, the long voyage to Australia could be even more dangerous with the constant danger from U-boats and other German/Japanese war ships as they cross the wide open seas… Sadly, such danger found her and that was the last time we would ever see the Calchas and most of her crew… Being there with her makes her feel part of her and her passing really brings home just how hard and dangerous life was back then, but importantly, how people just got on and dealt with it, so that’s another film that all today’s moaners should see.

Now to brighten your moods and bring back the smiles to your faces, we take you forward in time to the early 1960s, to join the beautiful Italian liner the Europa, but this time, although I know you will love this rare footage of this really lovely ship, the reason we have used it is to make you laugh!  Yes, to laugh, for those Italians had a unique way of off-loading their cargo and passengers in remote areas, in an unbelievable way  that is almost too funny for words… Forget Laurel and Hardy or Morecambe and Wise, this is unrehearsed and very real, yes, natural comedy at its best and another film today’s world should look at.

Now back to the 1950s and to Orient Line’s beautiful London offices where we book a passage on one of the most beautiful ocean liners ever to sail the seas of the world, Orient Line’s magnificent Orcades.  Once again it is a special film that almost everyone today today’s should watch because it is so wonderful to be able to experience how beautifully simplistic our world was back then, from the moment you enter those happy, helpful Orient Line offices to the moment you leave London on the boat train for Southampton, and that special moment when you see the very ship we are going to sail on, in person… Yes, there are no shopping malls, ice rinks, car racing, onboard surfing or west end style shows, but from first sight we fall in love with her stunning personal design for she really does look wonderful and everything about her is wonderful as well, her décor, crew, way of life, the happiness, the unselfish service and togetherness that sailed with you all the way as we cross the oceans to Australia… It is truly a wonderful experience and if only we had a ship like her today..

To end with, we become a touch serious as the next extremely rare film, sent to us by one of our dear Australian friends, shows us the most moving and thoughtfully solemn moments of that most handsome of ocean liners the Canberra, arriving in Sydney, Australia for the very last time… Built for the UK/Australian service, Sydney was her second home, so to witness the stillness of the early morning as she moves almost hesitantly across the harbour, knowing that she was now near the end of her days and that she would never return there ever again.   \in a way this beautiful film manages to capture the story of how our once great Merchant Nacy and shipping industry was at the same time facing its own unceremonious end.

As with all the film in this series this is the only one showing Canberra’s arrival that day and in such a way, as we escort her all the way to her berth where the crowds wait eagerly to welcome her and then a few days later, the same crowds are joined by the whole of Australia as they bid her farewell as she sets sail for home and the darkness of uncertainty.

It’s just as life for nearly all of us is; just so full of ups and downs as we develop the way to be able to deal with all the many changes that have made us what we are, and at the end of this programme do have a hanky to hand, for watery eyes and even tears of both sadness and happiness might find their way into the memories so many of us have of the wonderful world we all once knew so well.

Go on and treat yourself to some of the best TV you’ll every see and remember, we still have our special offer of three DVDs of your choice for the price of two, which is a massive saving. But making this amazing video series was never designed as a way for us to make money but much more important to ensure that the memories of what was the heyday of the UK and the Golden Age of Ocean Travel, will live forever and never be forgotten. Click here to order your copy of Episode 50 of the ‘Great Liners’ DVD series, ‘Something Special for Everyone’.

Thank you all for your greatly appreciate help and support, without which we would never have been able to make this so important video series.

This website uses cookies to improve your experience while you navigate through the website. Out of these, the cookies that are categorized as necessary are stored on your browser as they are essential for the working of basic functionalities of the website. We also use third-party cookies that help us analyze and understand how you use this website. These cookies will be stored in your browser only with your consent. You also have the option to opt-out of these cookies. But opting out of some of these cookies may affect your browsing experience.
Necessary Always Enabled
Necessary cookies are absolutely essential for the website to function properly. This category only includes cookies that ensures basic functionalities and security features of the website. These cookies do not store any personal information.
Non-necessary
Any cookies that may not be particularly necessary for the website to function and is used specifically to collect user personal data via analytics, ads, other embedded contents are termed as non-necessary cookies. It is mandatory to procure user consent prior to running these cookies on your website.
SAVE & ACCEPT